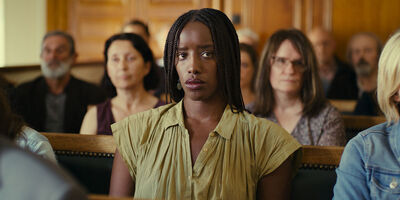 Explorations of identity, celebrity, and our own oral histories often make compelling cinema. At this year’s festival three films tackled these themes within three very different genres. In documentarian Alice Diop’s first fiction film “Saint Omer,” a novelist attending the trial of a woman accused of infanticide meditates on the ways their shared immigrant story connects them but does not define them. In Maïmouna Doucouré’s “Hawa,” a teenage girl on the verge of being orphaned seeks an audience with Michelle Obama, but instead finds her own internal courage. In Mary Harron’s “Dalíland,” an angel-faced young curator discovers the hard way that you should never meet your heroes.

Documentarian Alice Diop’s narrative debut “Saint Omer” is a visually arresting courtroom set drama that explores the similarities (and distinct differences) between two young women of Senegalese descent living in France. Rama (Kayije Kagame), a novelist, feels drawn to the story of Laurence Coly (Guslagie Malanda), a young woman on trial for the murder of her 15-month-old daughter. Both women are academically inclined, with complicated relationships to their own mothers. Both women occupy a liminal space between Senegal and France. While Rama is shown as an accepted academic, Laurence is continually othered, with those observing the trial shocked at her “sophisticated” command of French (to which Rama tells her agent she just sounds like any other educated woman.)

As the trial continues—shot with a beguiling patience by Claire Mathon—Rama’s steady façade begins to crumble. Originally intending to use the trial for research as she works on a modern retelling of Medea, Rama slowly finds repressed emotions bubbling to the surface. While listening to Laurence’s story, Rama’s anxieties about her impending motherhood and memories of her tempestuous relationship with her own mother occupy her mind. Here Rama finds a modicum of peace, knowing that, unlike Laurence, she has a support system on which she can lean.

When the details of Laurence’s abject isolation are revealed, Diop lets the white characters stew in their own bias; they see malicious intent in Laurence’s hidden life, rather than the systematic neglect at its core. It’s here where Diop’s years of work focused on exploring the immigrant communities on the fringes of French society comes into sharp focus. Laurence tells her story in intricate detail, down to smallest bits about her life in Senegal, her immigration story, even her inner emotions, yet she herself is never sure why she did what she did. Diop allows that ambiguity to remain, a specter hovering over the proceedings. Yet despite everything she shares about herself, to those working in the court system and in the university system, she is always just “African.” This is where Rama and Laurence truly meet, in knowing that these people will never truly understand what it’s like to be them.

Which transitions nicely to what works so beautifully about “Hawa,” Maïmouna Doucouré’s follow-up to her Sundance hit “Cuties.” As in her debut feature, Doucouré’s film follows a young first-generation girl as she navigates modern France. Born to stand out from the crowd, the titular Hawa (a fierce Sania Halifa), with her voluminous blond afro and Coke-bottle glasses, moves through the world with such innate strength and determination that shortly after meeting her everyone calls her “extraordinary” or “exceptional.”

Hawa lives in Paris with her grandmother Maminata (Oumou Sangaré), a Cameroonian griot, who spends her life singing the stories of the past. In the final stage of a terminal illness, Maminata is determined to find a new home for her rebellious 15-year-old granddaughter. Unable to cope with this impending loss, Hawa rejects all the options offered, eventually setting her sights on the impossible goal of being adopted by Michelle Obama. While the former First Lady is in town for her book tour, Hawa sets out to meet her, a journey which takes her all over Paris.

Peppered with cameos from contemporary celebrities like Grammy-winning chanteuse Yseult, rapper Mister V, and astronaut Thomas Pesquet, Doucouré’s film explores the allure of celebrity, and the escape they can offer us. In one particularly beautiful sequence, Yseult and Hawa look up at the stars in the sky and share stories of their connection to Cameroon, the people and the languages and the land that is always a part of them, just as their bones and their blood.

At its core, “Hawa” is a movie about the importance of connecting through shared experiences and shared stories. Doucouré expertly explores this theme through the lens of celebrity, interrogating why we’re so drawn to icons for guidance when they are just as lost as anyone else.

Mary Harron picks up this same theme with her closing night film, “Dalíland,” a biographical look at life of iconic surrealist Salvador Dalí (Ben Kingsley) and his spouse Gala (Barbara Sukowa) in the last decade of his life through the gaze of a young art curator named James (Christopher Briney). Unfortunately, although James allows the audience a surrogate into the wild world in which Dalí and Gala live, he doesn’t prove to be all that interesting as an observer, nor does Briney prove himself a compelling leading man.

Sukowa is always a commanding presence, however Gala as she is written here is more of a youth-obsessed harpy than a powerful tastemaker and businesswoman. Kingsley adds gravitas and pathos to his Dalí, who by this point in his life is always “on” performing the Dalí everyone expects him to be. The running time is also overextended by superfluous flashback sequences featuring a truly terrible performance from Ezra Miller as a younger Dalí.

“Dalíland” does shine is in the party sequences, where Harron and production designer Isona Rigau Heras meticulously recreate the famously wild art parties the two would host in their hotel suite. It’s unfortunate, then, that Harron chooses to focus on a character as boring as James journeying through this world, when a deadpan supporting turn from Mark McKenna as Dalí’s unlikely friend Alice Cooper, and Andreja Pejic’s evocative performance as Dalí’s muse Amanda Lear, both offer a glimpse of what could have been a much more interesting way into this story.

No comments to show.